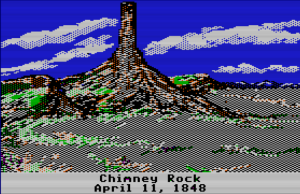 (This is the fifth in a series of posts that follows our real-life adventures in August 2011 along The Oregon Trail, Apple ][ version. We arrived here after a journey from Fort Kearny. Screenshots and photos by Rachel.)

Chimney Rock and Independence Rock (which we—and the pioneers—reach later in the trip) are perhaps the most familiar images that spring to mind when one thinks of the Oregon Trail. I mean, besides covered wagons, open plains, buffalo, and things that cause dysentery. It makes sense—both Chimney Rock and Independence Rock are really big landmarks. In fact, Chimney Rock is one of the more often-sketched landmarks that appear in the diaries and notebooks of pioneers and naturalists who made it as far as this western Nebraska rock formation—probably because it’s just so distinctive, and it was more so before 160 more years of erosion took its toll. 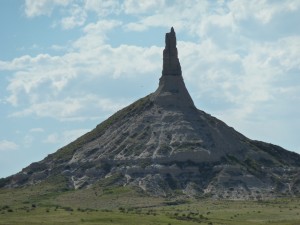 We made it to the parking area of this national historic site and wandered up to the fence that keeps the masses far away from the land surrounding the rock, and the rock itself. It still made for a pretty spectacular view of this still awe-inspiring landmark (if you like things like that, and we do). The Nebraska state quarter is probably my second favorite (behind the California quarter), and with all due respect to “the sower”, the unicameral legislature, and Chief Standing Bear (the other finalists for the quarter), I’m glad Chimney Rock is on it.

We didn’t stay long—there’s a small visitor’s center but we didn’t go in, as we really wanted to make it to Fort Laramie before the end of the day. Also, I don’t tend to dilly-dally in areas with signs (or big bugs) like this: 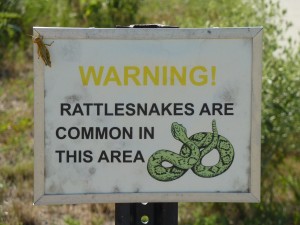 After considering the rock, and the sign, we hopped in George and zoomed toward Fort Laramie.

Distance ahead to Fort Laramie: In the game, pioneers would be on the trail for 86 miles before reaching Fort Laramie. In our car in 2011, it was a 79 mile trip that took just about an hour (I did say “zoom”).