(This is the fourth in a series of posts that follows our real-life adventures in August 2011 along The Oregon Trail, Apple ][ version. We arrived here after crossing the Kansas River and driving a few hundred miles across Nebraska. Screenshots and photos by Rachel.)

After crossing the Kansas River, we had a journey through Kansas and part of Nebraska before we’d get to the next official stop on the Oregon Trail: Fort Kearny. 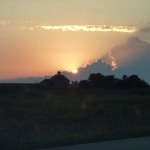 We decided to go easy on the horses (our car, George) and stay the night in one of Lincoln’s finest establishments, the Motel 6 out by the airport. But before we could stop for the night we drove for some time through the countryside. We saw some amazing clouds and sunset action—this photo (out the window, in a moving car) not doing it any justice at all—before we experienced a pretty solid downpour. Luckily, the wagon canvas was strong and we got to our stop unscathed.

We woke up the next morning bright and early—as befitting a pioneer—and headed west. Within a few miles, and therefore within a few minutes of the first weak gas station coffee of the day, we both could’ve sworn we saw a large dinosaur towering over one side of the road (the Eastbound side of I-80). 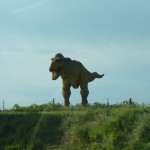 We took our Pioneer hats off for a moment and put on our Explorer hats, drove up to the next exit (several miles), then drove east until we saw the dinosaur once more. We got off the exit and investigated further, which confirmed that our early morning/crappy coffee-induced haze was true to a point: indeed it was not a real dinosaur, but indeed it was a very large Tyrannosaurus Rex replica on the side of the road. In this case, it was advertising Dinosaur Museum located nearby. We did not go to the museum, as the Oregon Trail awaited us, but it did spark an idea for another trip: dinosaur hunting in the midwest US.

We headed back to the interstate and continued the drive westward, to the next official stop on the Oregon Trail (Apple ][ version): Fort Kearny [State Historical Park]. 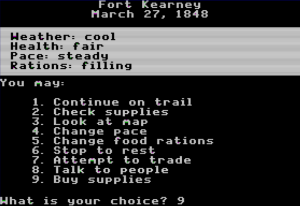 We selected “Buy Supplies”, which in this case was a stack of maps and a book that would become one of our best purchases along the way: 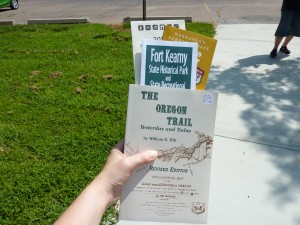 We did not know, when we purchased it, that The Oregon Trail: Yesterday and Today

(by William E. Hill) would become more valuable to us than…(gulp)…our beloved Internet. On more than one occasion, as we drove west through the wilds, we would pick up Hill’s book and see just what unmarked bits of awesome history were about to unfold before us (which Google Maps was unable to tell us).

In addition to the teeny-tiny museum inside the park’s visitor center (where we purchased the book and some maps), the grounds of the park itself are quite lovely and make for a pleasant walk. The images below show some of the features of the park (click on all to embiggen): 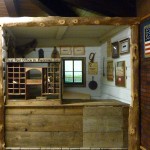 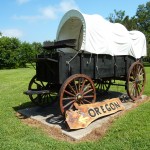 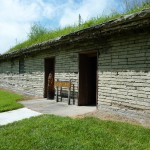 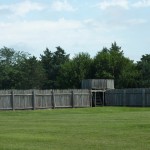 Replica of the Fort 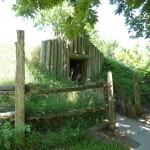 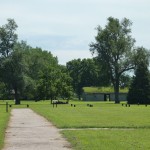 As you can see from the image of the replica, Fort Kearny itself was more of a supply outpost than it was a military outpost, and indeed the main function of Fort Kearny from the late 1840s to the late 1860s was as a way station, supply depot, and message center for travelers along the Oregon Trail, Pony Express riders, and (later) workers building the Union Pacific Railroad. For more about Fort Kearny, the Wikipedia entry is pretty good.

We left Fort Kearny and continued our journey west toward Chimney Rock, stopping for a moment at Windlass Hill.

Distance ahead to Chimney Rock: In the game, pioneers would be on the trail for 250 miles before reaching Chimney Rock. In our car in 2011, it was 257 miles.

2 Trackbacks to "Our First Historical Park: Fort Kearny (Danger: Dinosaurs along the way!)"