(This is the sixth in a series of posts that follows our real-life adventures in August 2011 along The Oregon Trail, Apple ][ version. We arrived here after a brief stop at Chimney Rock. Screenshots and photos by Rachel.)

As soon as we crossed into Wyoming from Nebraska, we knew we were in a whole new world. No offense to Nebraska or any of the other states, but boy howdy does Wyoming know how to “do” history. Imagine this: roadside historical signs you can actually read from the car before reaching the spot, so you know if it’s an interesting place that you might like to stop before you’re already past it. Heck, we were so thrilled by the roadside signs that if we knew the amazing restorations and replicas we’d see the rest of the way across Wyoming, we’d probably have just an apoplectic fit right then and there at the first mile marker. Wyoming’s awesome historical sites prompted Rachel to say both then and now, “I’d kind of like to get a look at their state/county budgets, and compare to places that are less amazing.” Like I’ve said before, we’re current and former cultural heritage professionals, and nerds, so this sort of statement should not come as a surprise. 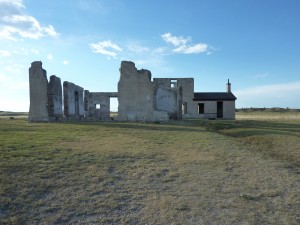 Anyway, we were zooming our way to Fort Laramie from Chimney Rock, so as to get to this wonderful NPS historical site before it closed at dusk. We did, and spent quite a bit of time wandering around its grounds. You, too, can see the grounds in this “virtual tour” from CyArk (that I wish were an Omeka site, but alas), but we both highly recommend stopping at Fort Laramie yourself if you’re ever in Wyoming.

For folks on Oregon Trail in the mid-nineteenth century, Fort Laramie was considered a “highlight” (things never change, it seems), as the large outpost was a transportation—and therefore trading—hub for emigrants along numerous trails: the Oregon Trail, of course, but also the California Trail, Mormon Trail, and Bozeman Trail, as well as the Pony Express, Transcontinental Telegraph, and Cheyenne-Deadwood stage routes. Fort Laramie was one of the only stable and secure trading posts for emigrants on a nearly 800-mile stretch between Fort Kearny and Fort Bridger, due in no small part to the military presence established there in 1849 specifically to keep the trails and supply lines open. Less-than-awesome events were centered around Fort Laramie the later decades of the nineteenth century, as it was the primary Army outpost from which soldiers erased Lakota Sioux, Cheyenne, Arapaho and other tribes from their lands.

Here are some of Rachel’s photos from the current Fort Laramie grounds (click on images to embiggen): 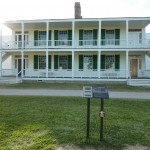 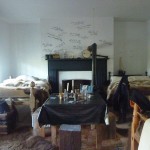 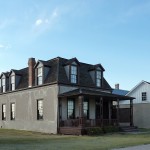 Lt. Colonel’s residence (and part of the post trader’s store) 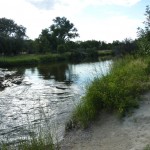 We wandered down to the Laramie River. 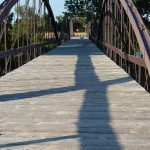 The Fort Laramie Bridge (constructed of iron in 1875). 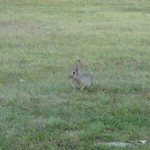 This jackrabbit followed us around.

Fort Laramie is one of the only places along our journey where I wish we had spent more time. Good thing for us we have years of travel and tourism ahead of us, not to mention some more nerdy trips planned which will take us into Wyoming again, so we’ll definitely be back. With our minimal exploration complete, we headed onward for anther few hours and stopped for the night, gearing up for what would end up being a true series of adventures the next day.

Distance ahead to Independence Rock: In the game, pioneers would be on the trail for 190 miles before reaching Independence Rock. In our car in 2011, it was a 181 mile trip, and we ended up staying on the rock (what? “on”?) a little longer than we intended….