Ash Hollow and Windlass Hill are not in the Apple ][ Oregon Trail game, but we stopped here nonetheless. I’m not exactly sure why we stopped at this not-in-the-game location as opposed to the hundreds of others, but I think it had to do with it being a little creepy—it was a cloudy day, we had descended into a bit of a valley, and from the road all we could see was what looked like an abandoned shack and a burnt-out wagon. I mean, who wouldn’t want to stop?

We had just turned off Interstate 80 (big highway) and onto US Highway 26 (smaller road), and the sky was darkening. I was thinking things like “we’re going to get crappy pictures at Chimney Rock,” and not so much “this is starting to look like kind of rough terrain for wagons to go through”. But indeed it was.

According to pioneer Howard Stansbury, in An Expedition to the Valley of the Great Salt Lake of Utah (1855), “we were obliged from the steepness of the road to let the wagons down by ropes”—a significant undertaking—”but the labour of a dozen men for a few days would make the descent easy and safe.” Shoot, and here we just zoomed on through…

As we were zooming on through, we decided to stop and check out the spot, even though to our current-and-former-cultural-heritage-professional eyes the area seemed to be in a little bit of a state of disrepair. Although designated as a state historical park in 1962, and noted in William Hill’s The Oregon Trail (1986) as having a visitor center housing “a fine museum and displays covering the whole history of Ash Hollow, starting from pre-historic times and including the Oregon Trail period,” today there’s just the remnants of a fake covered wagon-looking walkway and an empty building that was probably the museum, plus two signs describing wagons and what a “windlass” is (it moves heavy weights and includes a winch). (Click on images below to embiggen) 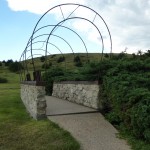 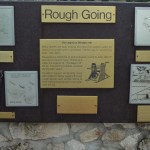 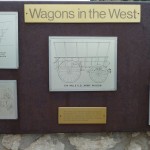 If it wasn’t so cloudy and lightning hadn’t started up while we were there, we would’ve explored a bit more. We would’ve seen the remnants of wagon ruts coming down the hill, gotten a better view of the vast site that acted as a popular campsite because of the grass for livestock and nearby plentiful water source, and probably trekked out to the grave of Rachel Pattison, whose story is sadly typical of someone traveling any of a number of overland trails in the mid-nineteenth century: she died of cholera.

We continued on toward Chimney Rock.