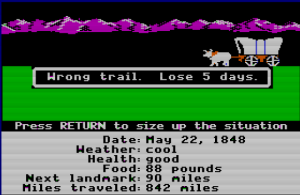 To this day, I still don’t know why we turned off the highway way too soon for South Pass City and ended up on a single-ish lane dirt road in the middle of central nowhere Wyoming, but we did (well, Julie did, and Rachel didn’t object). As seen in the previous post we even had a sentry cow give us that “silly humans” look, and we still kept going. 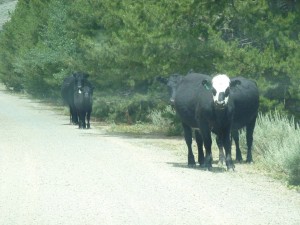 We even came across more cows that scared the bejeezus out of Julie, because come on—doesn’t that cow look like it has two bodies and was sent from some netherworld to warn us that we were absolutely in the wrong place? Also, we were a little more low on gas than we would have liked to have in the tank when driving in the middle of central nowhere Wyoming, and—no joke—Julie really didn’t have a clue where we were except somewhere east of where we were really headed.

And then, out of nowhere, we saw one of those amazingly well-kept historical signs that can be found all through Wyoming. A sign of civilization! 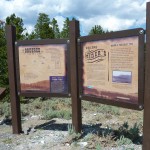 Or, at least a sign of history, and a sign that perhaps if we were totally and completely lost, there was a chance that someone would happen by every few days. It took us approximately five seconds to switch into “oh yay, let’s go explore!” mode, and it was only until later that Julie remembered all the police dramas that she’s watched in her lifetime, including those which feature serial killers doing their business in the middle of nowhere, at which time she got a little nervous again and Rachel had to talk her down the little road. Hey, it was a nerve-wracking day, what with having just gotten (almost) stuck at the top of a big rock a few hours earlier.

The sparkles of gold discovered in these remote hills and gulches never actually boomed into a “miner’s delight.” Despite this, the laborers, investors, and speculators who were lured to this region in the 1860s through the 1930s created lively and diverse communities.

Like its sister communities of Atlantic City and South Pass City, Miner’s Delight (first known as Hamilton City) sprouted up almost overnight, and faded almost as quickly. Still, in a short few years the citizens of this region helped to increase economic development and settlement of Central Wyoming, and contributed to the political structure of the new state.

Although time and nature have erased much of the physical evidence, a few haunting remnants remind us of the enduring legacy of Miner’s Delight and Wyoming’s only gold rush.

We invite you to continue down this path, through the gate, and into the 19th century, when Miner’s Delight was a lively community of 75 hardy men and women, some of whom endured freezing winters and punishing winds to chisel out a living form the land. Wander through the site and explore the fifteen structures that still remain from the 1870s through the 1930s.

Readers, we had the best time wandering around Miner’s Delight. Huge points, clapping, hat tips, and other signs of approval and appreciation to the Lander, WY field office of the Bureau of Land Management, for the efforts that have gone into preserving the ruins of Miner’s Delight (and all the other cultural heritage work in the area). We enjoyed the area so much that when we eventually do our camp-across-the-country trip, we might camp on nearby BLM land even though it breaks our “don’t camp unless there are flush toilets” rule! Anyway, some Miner’s Delight pictures follow (click on an image to embiggen). 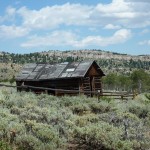 One of 15+ Buildings at Miner’s Delight 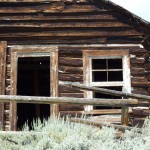 Getting Closer to a Building at Miner’s Delight 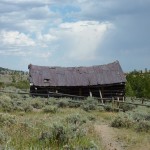 Another Miner’s Delight Building (there are more than a few!) 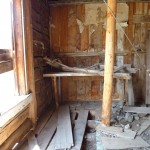 Peeking Inside a Building at Miner’s Delight 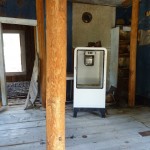 More Peeking Inside a Different Building at Miner’s Delight. 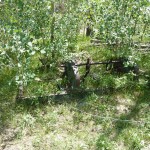 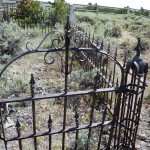 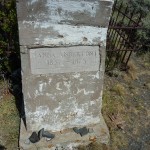 The Only Standing Gravestone in the Miner’s Delight Cemetery. 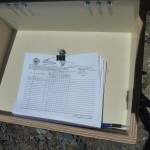 Signing the BLM book took the place of our Gowalla checkin, since there was no cellular service.

When we signed the BLM book, we noticed on the previous page that there had been at least 25 visitors from 15+ different states and countries in the previous week! Also, a note on the gravestone: being a census geek, I looked up Anna Anderton in the 1870 Hamilton City census, but she wasn’t listed, nor was any unmarried “Anna” of the right age anywhere in Sweetwater County. I do wonder who she was (although I admit to not spending very much time looking).

We reoriented ourselves westward and continued on toward where we thought South Pass City might be—still lost, mind you, but in much better spirits!

2 Comments to "Lost on the way to South Pass, we found a mining camp"

1 Trackback to "Lost on the way to South Pass, we found a mining camp"