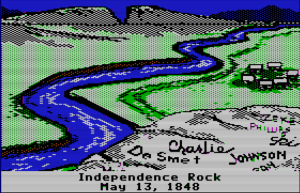 (This is the seventh in a series of posts that follows our real-life adventures in August 2011 along The Oregon Trail, Apple ][ version. We arrived here after visiting Fort Laramie. Screenshots and photos by Rachel.)

Chimney Rock may be one of the most recognizable landmarks along the Oregon Trail—it’s a 300-foot rock formation in the middle of the plains, after all—but Independence Rock was both recognizable and really meaningful to the emigrants traveling the route: if they didn’t reach Independence Rock by July 4th, they would be in danger of experiencing potentially crippling weather and limited grazing opportunities for their horses and oxen before reaching their ultimate destination. So, everyone raced to Independence Rock, and on the day we set out for it, so did we, as we had a full day planned. 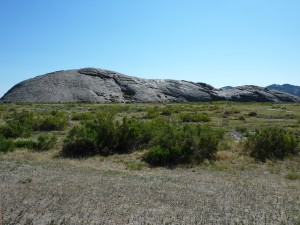 The Independence Rock site is a nice little rest area, so we left George to hang out with the other cars and started the short walk out to the rock. If you walk the entire way around the rock, it’s just about a mile, and all along the way are the famous inscriptions of names of the travelers along the way. We didn’t walk the entire way around the rock, but we saw plenty of carvings. I must say that I was shocked at the lack of modern vandalism to the names, the rock, and the general surroundings—doesn’t say much about my faith in humanity, I know—but there’s nothing keeping a person away from the rock itself.

Here’s a photo of one set of carvings. No one famous (that we know), and I’m surprised we don’t have more photos of names, but we soon became preoccupied with something other than the names on the “Great Registry of the Desert” (click on the image to embiggen). 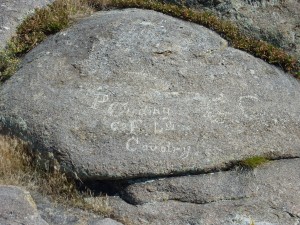 Did I mention that you can actually climb on the rock? Not “hey, there’s a sign that says you can’t, but everyone does, so go ahead,” but actual text on the signs and in the brochure that says you can climb up the 130+ foot rock face, just be careful, don’t mess with the names or add any of your own, and pack out your trash. So we did, despite Julie’s fear of heights (not heights per se, but the feeling of instability and possibility of careening toward one’s death). We picked a scramble-up-able section and did so—opting for a scramble path off to the side, rather than a straight up climbing path, since neither of us are climbers by any stretch of the imagination. (Click the images to embiggen.) 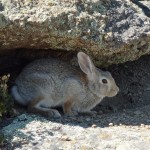 A friendly bunny greeted us. 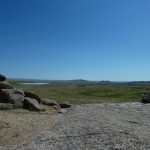 A lovely view from the top. 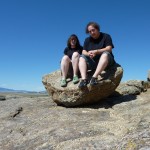 So we scrambled up to the top, a cute little bunny greeted us, we took some photos from the top and walked around a little bit, and I think we might have had a snack. We even set up the camera to do one of those fancy timed shots that I hear people do…I say “hear people do” because I have never in my life done so, being of the “no one should ever take my photo lest they break their camera” mindset. But Rachel took this picture of us, all windswept and on top of a really big rock in Wyoming, in which the looks on our faces can be correctly interpreted as saying “Did the camera do its thing yet?” and “I don’t know.”

And then we realized that after walking around at the top, we could no longer find the path we easily scrambled up…and therefore couldn’t easily see a way back down. We went back to the bunny, and he was of no help. We walked along the top again, toward where other folks were frolicking, and could only see the straight-down path that we chose not to climb straight-up, originally.

We walked around some more, flexed our muscles a little bit (ok, really Julie was testing her dual bum knees, and Rachel was seeing just how bendy she could be), and found a spot where we thought we could slide down without killing ourselves, since it had a gentler slope. The trick was that the landing was blind, and all we knew was that it wasn’t directly to the nice, flat trail. It was into a bunch of bushes that probably housed snakes and varmints. Dagnabit, varmints! (Click on the image to embiggen.) 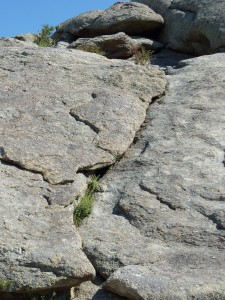 We slid down this on our butts, acquiring unknown lichen on said butts along the way.

It doesn’t look like much from this angle—from the bottom looking up—but it was a little unnerving. We did land in the bushes (sorry, bushes) but did not land on a snake or other varmint. We calmly walked to the trail and around the rock like nothing had ever gone awry, took a moment to wash up in the restrooms, and hopped in George and headed toward South Pass.

But what we found next wasn’t South Pass. It was a sentry cow. 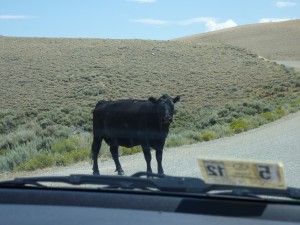 I am a sentry cow. Or maybe just a regular cow.

Distance ahead to South Pass: In the game, pioneers would be on the trail for 102 miles before reaching South Pass. In our car in 2011, it was a 117 mile trip that was full of adventure, as we got lost and wandered into a mining camp. For real.

2 Trackbacks to "Independence Rock: We Almost Got Stuck at the Top"