Before addressing the topic of this post, I (Rachel) would like to take a moment to vent: the arduous process of getting screenshots from our beloved Droid RAZRs came damned close to making me root my phone. In fact, I originally caved and forked over $4.99 for an app, but grabbed a refund almost immediately upon reading that it had to be setup with a PC every time the phone was rebooted. This process is not so useful on the road, and certainly not worth a fiver when I can theoretically capture the screen for free with the SDK (and natively with a hardware-button shortcut in a coming update). So! If any of you travel the same path, note that the adb platform tool is no longer installed by default with the SDK. If you get an ADB error when launching ddms, open the SDK Manager and install the platform tools package. 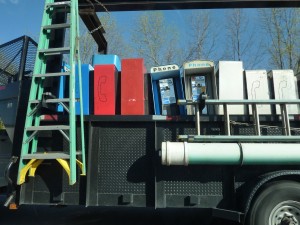 I spy with my little eye...something ancient.

There are a number of traditional road trip games designed to keep you entertained in the car without requiring the driver to interact with cards or boards or meeples, but they have their limits. I might say “I spy with my little eye…something ancient” only to have the object in question be ancient history before my road trip companion has figured it out.  I used to use the Alphabet Game when plagued with insomnia, so it’s kind of an anti-entertainment for me. Also? This is a blog by two nerds in love with their smartphones, so of course we’re going to utilize them!

We’ve Got a Waze to Go

Hey, wait, Waze is a game?? Waze markets itself as a GPS Navigator and community traffic tracker, but it’s really all about the cookies.  Also, candy. While the app does do a fine job of providing directions, it’s also heavily gamified.

The primary game element for us is cookie munching, which is Waze for “taking the road less traveled”. Part of the community traffic tracking is accomplished by logging data as people drive—distance, heading, speed and so on. If Wazers have only driven one way down a street or haven’t driven on it at all, the app highlights the street in a special cookie layer to tempt you off the most efficient path. When driving down a cookie street, your car icon transforms into a Pac-Man styled Waze character and chomps the cookies as you go. Chomping cookies is, naturally, an excellent way to boost your score, but we find the hunting and munching to be enjoyable for itself.

We have a lot more to say about Waze, so it will have a post all its own in the future.  Oh, and it’s also available for iPhone, Blackberry, & Windows devices.

Is there really a better use for 4G than using an online quiz to interrogate the driver? No, there is not. How else would we have known that Julie’s alignment is Lawful Good?!?!! 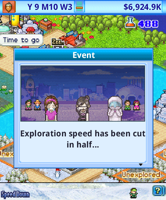 While exploring, I caught a cold!

After one or more revealing quizzes, the driver might want the passenger to shut up, and politely suggest said passenger play one of the many single-player mobile games installed on their phone. These games are also good if the passenger just needs some “alone time” and can retreat into the game world for a little bit, a foot away from the other person on a really really long drive (note: this happens to Julie, an introvert, much more than Rachel, the extrovert!).

If the driver and passenger(s) play the same game, the passenger can entertain the driver with groans of “nooOOoOOooO, my explorers caught a cold!!” which I’m apt to do when playing Epic Astro Story (as opposed to Game Dev Story, which comes with laments about power outages and bad reviews).

Like Waze, Epic Astro Story is slated to have its own post, because ohmygod does it scream to be captioned as a comic-record of a real life adventure.

What about you? What sorts of games do you play in the car, as either a passenger or driver? (Maybe don’t answer that last one if you’re pulling out a mobile game while driving…we don’t want to know.)