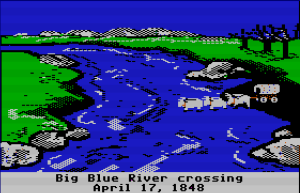 (This is the second in a series of posts that follows our real-life adventures in August 2011 along The Oregon Trail, Apple ][ version. We arrived here after the Oregon Trail trailhead. Screenshots and photos by Rachel.)

In the Apple ][ game, the Big Blue River Crossing is the third stop, 185 miles into the adventure. However, as we were meticulously (*cough*) mapping our route before the trip and checking various and sundry historical reports from the trail, we identified a “Blue River” on the map that was approximately 19 miles from Independence, heading toward Topeka (and the Kansas River Crossing), and crossed by a road called “Blue River Road”. We figured that had to be it, so we headed for it—a second stop instead of a third. 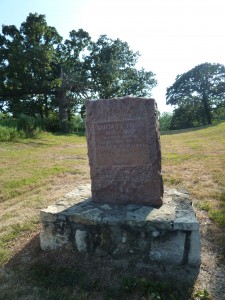 I mean, it was a river, right? A Blue River, no less. And people referred to the crossing as “Independence Crossing” and we were near Independence, and there were Oregon Trail signs on our route, so…

This trail marker is at Red Bridge on the Santa Fe Trail. Standing in the middle of what was the trail, after having crossed a river (ahem), we were in the remnants of a two-way commercial route between Missouri and Santa Fe that was pioneered by William Becknell in the 1820s. Commerce, not homesteading, was the goal of the Santa Fe Trail, unlike the Oregon Trail.

So it wasn’t the Big Blue River Crossing. We were on a trail, and Oregon Trail pioneers did use it in conjunction with those on the Santa Fe Trail, but we messed this one up. Turns out that the “real” Big Blue River Crossing—and the one referred to in the game (correctly)—is near Alcove Spring, Kansas. In fact, there’s a whole park and trail marker extravaganza there. I’m not exactly sure how we missed that, or why we were so sure that the game spots were wrong.

In fact, given our inability to map this one correctly (stop 2 of … several) I’m surprised we made it to Oregon City (but we did!).

Here’s a screencast from the Apple ][ game, of pioneers much smarter than us, crossing the Big Blue River in Kansas:

Here’s us, crossing a bridge over a river near the Kansas border, on a road called Blue River Road, adjacent to the Santa Fe Trail, which is in fact nowhere in the Apple ][ game:

While the pioneers in the screencast got stuck in the mud, we did not. Take THAT! Nor did we get snakebit or dysentery, and instead we zoomed toward the next stop.

1 Comment to "Crossing the Big Blue River (we thought)"

2 Trackbacks to "Crossing the Big Blue River (we thought)"